This is a nice little table I have made using the work of Mladen Jovanovic and his load exertion table, which is based off the work of Dan Baker. I’ve also combined this with a 1 rep max prediction equation I found courtesy of Jim Wendler many moons ago. It’s not near as detailed as some of the work by Mladen, but it’s an easy table to put together in a few minutes that will help estimate loads to be lifted at a certain % of 1 rep max.

There really isn’t too many steps to this one, it’s all just manual input for the most part and then some equations and you are good to go! Let’s start with the 1 Rep Max Prediction Table, which is the first bit of table from A1 to F14.

Everything in this top table is all just manual input, so you can play around with it as you please. I’ll focus on the two green circles in the picture below. The green circle around the figure 103 in the blue box, is the sum of the weight used (in kilograms) times the reps achieved (the two numbers in red circles). To get this number use the equation in the green circle in the formula box. =SUM(WEIGHT/1.03-(0.03XREPS))).

We can then use this predicted 1 Rep Max number to program our lifts for percentage rep based training. The load exertion table, as mentioned previously, has been manually inputted and is something I found courtesy of Mladen Jovanovic. I just added in my own column to the table (Weights Based on Predicted 1RM).

I really like the exertion headings; max exertion, near max exertion, hard exertion and medium-hard exertion, and how they are worded. I’m finding it a much easier way of explaining to athletes why they are training at a certain percentage and reps and how hard it should feel, as opposed to giving them a percentage of 1RM and reps and pretending they know what’s going on. It also makes the coaches job easier too, which I am always a fan of!

So, the column I have added (the weights to be used column), highlighted in the red circle in the picture below, simply multiplies our predicted 1 Rep Max by the percentage we wish to train at. 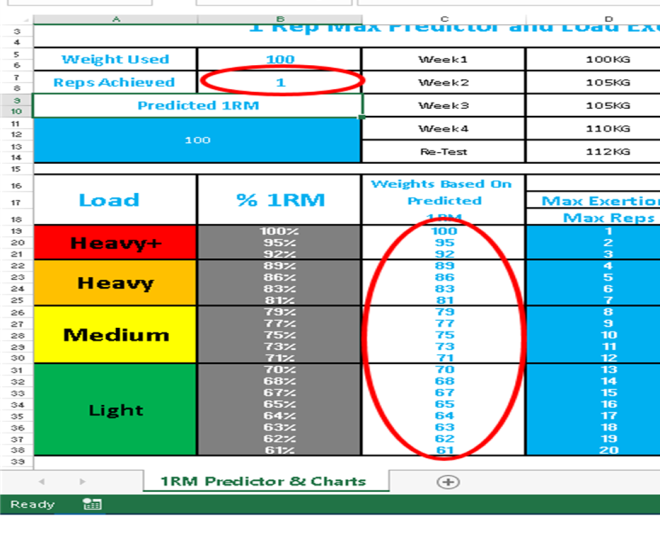 Notice how the numbers in the column highlighted in red changes when you alter the reps achieved, which alters the predicted 1 Rep Max number in cell A11. Once I have my percentage based weights, I can consult the load exertion table to determine how hard I want my athletes to train at this percentage, which will determine the reps to be used at a certain percentage.

And that’s all it takes, relatively simple I feel!

There are many prediction equations out there, this is just one I have chosen. The equation I use is probably the least generous equation from the ones I have seen. But, I would prefer to have the equation underestimate 1 RM as opposed to overestimating it.

I use this equation as a tool that helps guide progression in an athletes’ main lifts, as well as take the guesswork out using percentages to calculate weight to be lifted. I also use it as a guide to help with 3 Rep Max testing sessions and warm up sets.

I have found though, that predictions for a weight lifted for more than five or six reps, tends to overestimate slightly for 1 Rep Max and subsequent percentages, so don’t follow this equation blindly, use it as a guide. If the numbers it spits out seem too good to be true, then they most likely are.

You can also make a table that will automatically update for an entire team using the 1RM equation and load exertion table. This is something I can put together for you, please contact me for further information on this if interested.